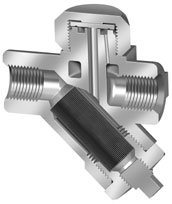 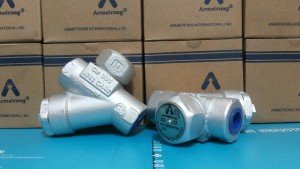 The Controlled Disc (CD) Steam Trap is a time-delayed device that operates on the velocity principle. It contains only one moving part, the disc itself. Because it is very lightweight and compact, the CD trap meets the needs of many applications where space is limited. In addition to the disc trap’s simplicity and small size, it offers advantages such as resistance to hydraulic shock, the complete discharge of all condensate when open and intermittent operation for a steady purging action.

Operation of controlled disc traps depends on the changes in pressures in the chamber where the disc operates. The Armstrong CD trap will be open as long as cold condensate is flowing. When steam or flash steam reaches the inlet orifice, velocity of flow increases, pulling the disc toward the seat. Increasing pressure in the control chambers snaps the disc closed. The subsequent pressure reduction is necessary for the trap to open. The heating chamber in the cap and a finite machine bleed groove in the disc control the pressure reduction. Once the system is up to temperature, the bleed groove controls the trap cycle rate.