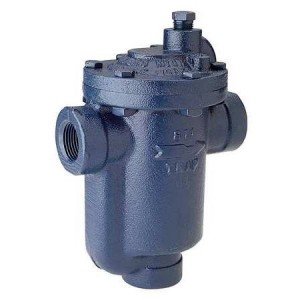 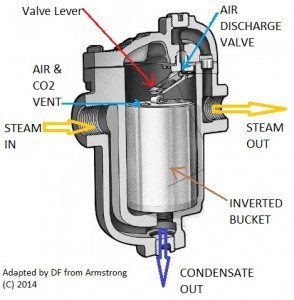 ENERGY EFFICIENT BECAUSE IT’S SO RELIABLE

The inverted bucket is the most reliable steam trap operating principle known. The heart of its simple design is a unique leverage system that multiplies the force provided by the bucket to open the valve against pressure.

Since the bucket is open at the bottom, it resists damage from water hammer, and wear points are heavily reinforced for long life. The inverted bucket has only two moving parts-the valve lever assembly and the bucket. That means no fixed points, no complicated linkage. Nothing to stick, bind or clog.

CONSERVES ENERGY EVEN IN THE PRESENCE OF WEAR

In fact, as an Armstrong inverted bucket trap wears, its tight seal actually improves. The valve and seat of the Armstrong trap provide essentially line contact-resulting in a tight seal because the entire closing force is concentrated on one narrow seating ring.

An Armstrong inverted bucket steam trap continues to operate efficiently with use. Gradual wear slightly increases the diameter of the seat and alters the shape and diameter of the valve. But, as this occurs, a tight seal is still preserved-the ball merely seats itself more deeply.

The stainless steel valve and seat of the Armstrong inverted bucket steam trap are individually ground and lapped together in matched sets. All other working parts are wear- and corrosion-resistant stainless steel.

VENTING OF AIR AND CO2

The Armstrong inverted bucket provides continuous automatic air and CO2 venting with no cooling lag or threat of air binding.

OPERATION AGAINST BACK PRESSURE

The Armstrong inverted bucket has excellent performance against back pressure. It has no adverse effect on inverted bucket operation other than to reduce its capacity by the low differential. The bucket simply requires less force to pull the valve open and cycle the trap.

Armstrong designed its inverted bucket to be virtually free of dirt problems. The valve and seat are at the top of the trap, far away from the larger particles of dirt, which fall to the bottom. Here, the up-and-down action of the bucket pulverizes them.

Since the valve of an inverted bucket is either fully closed or open, dirt particles pass freely. And the swift flow of condensate from under the bucket’s edge creates a unique self-scrubbing action that sweeps dirt out of the trap. To review a specific inverted bucket steam trap, select a series and go to the menu.