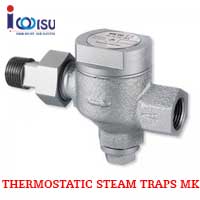 A distinguishing feature of the MK series is the outstanding responsiveness of the membrane regulator. It is especially suitable for heat exchangers whose operation is adversely affected even by minimal banking-up of condensate.

Especially recommended for use in:

When the system is coming to a stop: As the temperature of the condensate falls, the control medium begins to condense.

When the system is starting up: The steam trap is in the open position. Air and cold condensate are discharged.

As the temperature of the condensate rises, the liquid control medium begins to evaporate. The rise in pressure causes the thermostatic capsule to close just below boiling point